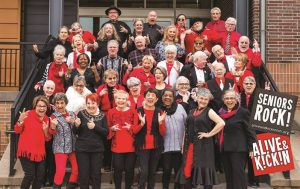 The son of a Rockette — dancers who perform in the Radio City Christmas Spectacular in New York — Michael Matthew Ferrell was drawn to theater. And by the summer of 2010, he was working full-time as a choreographer in the Twin Cities. At that time, he was also mentoring a young theater artist who he saw on a regular basis.

“She was being raised by her grandparents,” said Ferrell, “who were both artists. He was an actor at the Guthrie Theater and she was an opera singer. They were both in their 80s and full of life.”

One day, fascinated by the success of their artistic careers, Ferrell asked the talented duo if they were working on any projects and their answer shocked him.

Ferrell also noticed the couple was living in isolation — a result of having lost many of their artistic peers. So, with one free month between theatrical projects, Ferrell thought he would put together a small singing group for older adults.

“I held auditions and I had 15 people show up,” he shared. “Alive & Kickin was born and we’ve now been going strong for 10 years.”

Alive & Kickin is a 501(c)3 nonprofit performing arts organization serving 5,000 to 7,000 older adults in the Twin Cities metro area. The group’s mission is to offer older adults support through the craft of music and empowerment of self-expression. Their mantra is: “You’re never too old to pursue your passion.”

During its beginnings, Alive & Kickin was a touring vocal ensemble rehearsing in people’s garages and playing around the upper Midwest at places like retirement communities and the Minnesota State Fair. With palpable excitement, Ferrell recalls those early days.

“A lot of the music that we were performing was probably not typical to [an older adult] at that point,” he said. “I was drawn more to very contemporary music or kind of classic rock ‘n’ roll.”

“Queen,” continued Ferrell, “is my absolute favorite rock band. So, we started performing Queen and Lady Gaga and Bon Jovi. And, the thing just took off.”

Ferrell quickly learned that while he started the organization as a vocal ensemble, the more he worked with older adults, the more he realized there was a need for a place where people over 65 could come together to form community. Thus, he refocused the group and it became a senior services arts organization.

As Alive & Kickin expanded its programs and offerings, Ferrell also noticed several people with disabilities were attending their singing workshops. He said, “We were getting several folks with dementia, Alzheimer’s and schizophrenia coming through, and I wanted to make sure we were meeting their needs.”

In 2019, Alive & Kickin received an Arts Learning Grant from MRAC to execute SingOUT — a monthly vocal and music education series for underserved and older adults with disabilities, ages 65 to 90+, which is held at the Cora McCorvey Health and Wellness Center in North Minneapolis. The first SingOUT took place February 2019 to December 2019, with 10 classrooms and rehearsal sessions leading up to a community performance event.

“There isn’t a time that goes by,” said Ferrell, “where one of the caregivers will come and tell us how happy the people they help are with the SingOUT program. Not too long ago, a caregiver shared that her client used to stay in his room all day. But after attending the SingOUT, he now smiles and is more social. He is also making friends and the monthly session is marked on his calendar with high priority.”

In addition to the monthly Sing Out program, Alive & Kickin does one big theatrical production every year that has a two-week run at a major theater in the Twin Cities. For the past three years, the show has sold out. The theme for the 2020 major production is “coming of age,” but Ferrell explained that it’s not the common rites of passage people would assume.

He shared, “This year’s theme of ‘coming of age’ is celebrating aging like we’ve never done before. Some of the songs we’re doing are ‘I’m Coming Out,’ by Diana Ross, ‘I Will Survive,’ by Gloria Gaynor, and ‘Don’t Stop Me Now,’ by Queen. And so, every song has this message that refers back to this new rebirth of life; it celebrates a new phase in someone’s journey in this world.”

“We have been rehearsing for nine months,” Ferrell continued, his voice pained, “had costumes ready to go, and then COVID-19 hit.”

Like every arts non-profit in Minnesota and across the U.S., the COVID-19 pandemic has brought Alive & Kickin to a screeching halt. As a small organization with just two full-time employees and three part-time staff members, Alive & Kickin is not just looking for ways to stay afloat financially, but also for ways to continue their work.

“We’re kind of in a demographic where we’re getting a double whammy. Not only are we in the arts, but we are also serving [older adults]. And obviously, right now, the [older adult] population is one of the most vulnerable communities being affected by COVID-19.”

One of Alive & Kickin’s biggest sources of income is ticket sales. And in the month of May alone, they had to cancel nine shows — something that has greatly hurt the organization. Still, through the darkness, Ferrell is focused on his commitment to the community his organization serves.

“We’re trying to keep our community members connected,” he said. “Over the last week, I’ve been collecting old laptops that have a camera from people so that our [members] can start participating in Zoom meetings with us. And so, we’re a little bit challenged with some of that right now.”

Ferrell’s mom, the former Rockette, recently moved into a nursing home. He took her laptop and is, as we speak, upgrading the software so that one of his clients can use it to communicate with his fellow singing mates.

Another program Alive & Kickin will be launching soon is a type of pen pal program, to help his clients with limited tech skills stay connected and engaged.

Ferrell said, “I’m an optimist and I know we’re going to get through this tough time. I dream of the day we can all link our voices once again.”

Belo Miguel Cipriani is a media entrepreneur, an award-winning author, a prize-winning journalist, and a teacher, nationally recognized for his contributions to the advocacy, employment diversity, and disability fields. He is the CEO and founder of Oleb Media – an ADA compliance firm – and the publishing house Oleb Books.  He, along with writer Anitra Budd, is talking with MRAC artists and groups to hear and share their stories in the monthly series.