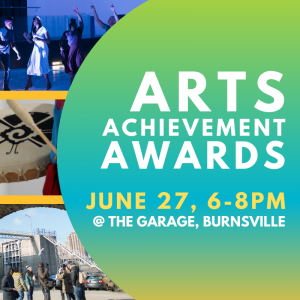 Please join MRAC board and staff to celebrate the awarding of the 2019 Arts Achievement Awards
and the 10th Anniversary of the Legacy Amendment:

We invite panelists, grant applicants, artists, and arts supporters to join us at The Garage, home of the Twin Cities Catalyst Music, to celebrate with light refreshments, performances, art installations, and music by DJ Neeka.

Please RSVP so we have enough food and refreshments.

The MRAC Arts Achievement Award began in 2009 as a way to recognize organizations that particularly exemplify MRAC’s mission of increasing access to the arts. The awards call attention to the outstanding contributions of arts organizations or nonprofit organizations doing arts programming in the 7-county Twin Cities metropolitan area. MRAC has been recognizing three organizations in the following categories: Greater Metro, Core Metro (Minneapolis/St Paul), and Great Beginnings for organizations with under two years of programming. The recipients were selected by the MRAC Board of Directors because of their excellence in:

This year also marks the 10th Anniversary of the Legacy Amendment, a tremendous investment into the Arts & Cultural Heritage Fund, making our region a nationally recognized creative hub. Join the MRAC board and staff to celebrate this milestone and to congratulate the 2019 Arts Achievement Award recipients.

Grounded in African diasporic perspectives, Brownbody builds artistic experiences that disrupt biased narratives and prompts audiences to engage as active participants in the journey. Brownbody, created in 2007, became a 501c3 in 2013, and has presented works for the stage and the ice exploring issues on race, culture, history, and community. Brownbody accomplishes this by presenting works about US Black diasporic communities through a blend of modern dance, theater, social justice, and figure skating. By centering African American performers and stories, Brownbody expands the bounds of figure skating and dives deep by offering honest and nuanced narratives around blackness—encouraging audiences to think differently about how the past informs contemporary systems, beliefs, and behaviors. Brownbody has thoughtfully and effectively continued to develop through MRAC grants, services, and processes.

Indigenous Roots (IR) began in 2007 from a dance and drum community circle known as Kalpulli Yaocenoxtli drum troupe implementing community engagement, performances, and workshops highlighting indigenous Aztec dances and chants. Through the years, IR has evolved to meet the growing need to reconnect with ancestral knowledge systems. Additional classes such as song, instrument, language, and philosophy were created to meet the requests of community members. IR incorporated as a 501c3 in 2015, followed by opening the Indigenous Roots Cultural Arts Center (IRCAC) in 2017, a community based multidisciplinary, multigenerational, multicultural artistic home to six partner organizations and numerous affiliated POCI-identified (people of color and indigenous) artists in Saint Paul, each uniquely presenting the many faces and creative expressions blossoming in the cultural scene of Dayton’s Bluff on the East Side. They have a remarkable ability and commitment in centering community, and effectively build intergenerational support and solidarity across cultures.

The Asian Pacific Islander American (APIA) Minnesotan Film Collective is a first-time, three-year initiative to train as well as create opportunities for the APIA filmmaking community in the Twin Cities. Due to a lack of representation of APIA narratives in mainstream media, there are no APIA Minnesotan narratives in mainstream media. APIAMNFP’s goal is to bridge this gap by bringing together APIA filmmakers who are in need of a space to write their screenplays, learn & train on-set, produce new films, and receive criticism. The group solely focuses on narrative-driven content in the 1.5-hour TV, hour TV, and short & feature film space. They recently completed a half-hour TV screenwriting intensive in 2018 and are amidst their one-hour TV and feature film screenwriting labs as well as the first production on-set training lab. They have had over 250 unique APIA, black, and POC participants since their inception.